BySuzanne Laister
In The News

The city of Shanghai is China’s largest by population: an enticing mix of ultra-modern and traditional, and a showcase of what happens when the worlds of East and West combine.  China Travel Service recently arranged a five-day famil of Shanghai and the neighbouring cities of Suzhou and Hangzhou exclusively for TravelManagers, with nine personal travel managers (PTMs) taking part.

It was a first-time China experience for all the PTMs, including Carli Hester, who is representative for Mount Duneed, VIC.

“I was never overly keen on visiting to China previously,” Hester notes, “but I decided that this famil was a great opportunity to find out what I was missing out on.  The first-hand knowledge I have now acquired will definitely assist me in advising my clients, but I would also love to return to Shanghai one day for my own sake – it’s an amazing city.”

After assembling in Shanghai, the group were taken to the nearby city of Suzhou, where they had time to explore the Humble Administrator’s Garden, which is considered one of the most beautiful in China. 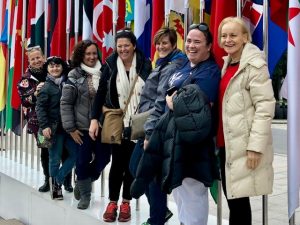 “The Garden was originally constructed in 1509 by a retired magistrate,” explains Hester.  “The garden itself is stunning, but I also really loved the cruise along the city’s Grand Canal – it’s hard to ignore the feeling that you have stepped back in time. “

From Suzhou, the group continued further south, making a stop at a silk factory at which they were able to observe the fibre’s process from caterpillar to fabric, and learn about the history and culture of silk in China.

“The silk factory was very interesting,” according to Lyn Tyson, representative for Pymble, NSW, “and I would definitely recommend this fascinating region of China to my clients.

In Hangzhou, the famil group were treated to an unforgettable boat ride on the serene waters of the modestly-named, West Lake.  Known as ‘Paradise on Earth’ and often described as China’s most beautiful lake, the group relished their time here before continuing further south to Hangzhou.

“We saw so many beautiful gardens and parks in the course of our journey,” says Tyson, “and every one of them was exquisite.  In fact,” she adds, “I was quite pleasantly surprised by just how clean the air was and how tidy it was everywhere we went.”

Hester, Tyson and their TravelManagers colleagues were also provided with the opportunity to visit the world-famous No.1 Tea Plantation and try their well-known Dragon Well Tea – widely considered to be the best green tea in China.

“From Hangzhou, we headed back north to Shanghai, where we spent our final evening as a group in China,” says Georgina Grandi, representative for Terranora, NSW.  “I will definitely be recommending that my clients follow in our footsteps and head for the rooftop bar in Shanghai’s Hotel Indigo, from which we were able to soak up a magical night view of the city skyline.”

Grandi says she was surprised by how family-friendly the destinations they visited during the famil were, and she already has several families in mind that she believes would enjoy a family holiday in and around Shanghai.

“I actually found Shanghai to be very similar to Singapore in many ways,” Grandi says, “in that it’s safe, clean, easy to get around and has a great public transport system.  There’s also a great range of Western-style eateries so that if you’re a little anxious about trying more traditional Chinese dishes, you won’t be forced to go hungry.”

Tyson says the three cities that form the Shanghai triangle have made a lasting impression on her, and she is very much looking forward to a return visit sometime in the not-too-distant future. 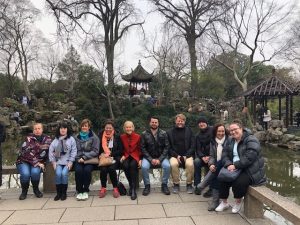 “I was also really happy with the standard of service we experienced when flying between Sydney and Shanghai with Qantas – they surpassed my expectations in all areas of their service.”

The famil participants were hosted by China Travel Service, who put together the itinerary and organised local guides wherever they thought it necessary to enhance their experience.

“The benefits of having a local tour leader and/or organiser cannot be overstated,” says Mel Whyte, representative for Devonport, TAS.  “And having first-hand knowledge of the destination means I can provide good advice when it comes to the finer details of a client’s trip, such as opting for pre-booked shuttle service to get from the airport to the hotel in Shanghai or providing a list of recommended restaurant options in a destination.”

Having enjoyed a taste of what China has to offer, all nine PTMs say that they are eager to return at a later day to explore this fascinating country in a little more depth.

“Shanghai is a vibrant, exciting and futuristic city and it has so much to offer to its visitors,” Edgar confirms.  “Without a doubt, I will be returning.”

Keeping Calm and Carrying on Despite Cancellations, Closures and Curfews

Calling Out the Team – TravelManagers’ Collaborative Approach to Client Care

The Kindness of Strangers – Personal Travel Managers to the Rescue